Eight magical aquariums! And inside them – fascinating depths of the sea, ancient creatures and the captivating blue of underwater world. This vision will delight the connoisseurs of three-dimensional attractions.

Azure depths and coral reefs where swimming, life-size reptiles are just at your fingertips! All these attractions are available in our Prehistoric Aquarium. Its interior reveals the secrets of the sea from thousands of years ago!

Here you stand face to face with monstrous reptiles. All specimens are extraordinary, but one of them in particular stands out from the rest. The biggest surprise is the culmination of the tour! An attack by a 20-meter water beast will make your heartbeat faster, even for the greatest adventurers. Take a chance and come close to a giant shark!

Don’t think twice! Take a journey to the depths of the sea and you’ll have the adventure of a lifetime!

Excitement guaranteed for the whole family!

ATTRACTION THAT MAKES VISITORS FALL IN LOVE WITH YOUR Theme PARK

We are delighted to present the Prehistoric Oceanarium project. It is the first facility in the world that “brings to life” prehistoric sea creatures so that you really feel like you’re in the middle of the ocean! With the use of the latest 3D technologies and in cooperation with the best paleontologists, we have managed to reconstruct the most captivating prehistorical water creatures that lived in the ocean depths 200 million years ago – all of them as gigantic as they were in real life. The attraction functions as an underwater oceanarium with mysterious mazes, huge “aquariums” and amazing sounds. Believe us when we say that it’s the most innovative water dinosaur attraction ever built. Our visitors’ comments speak for themselves:

BETTER THAN SOME OF THE DISNEYLAND ATTRACTIONS – FANTASTIC!!!!!!

I have great respect for those who made the Oceanarium, especially the scene with the shark. I watched it twice and my children didn’t want to leave the building. Last year I was in Disneyland and I can officially say – this Oceanarium is better than some of the Disneyland attractions!!!

Each scene presents a part of a different water creature’s life and is projected on screens that look like huge aquariums. The surroundings are arranged in such a way that you feel like you’re in an underwater cave or submarine. 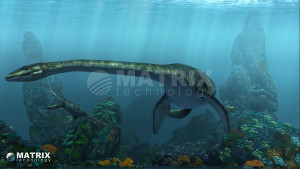 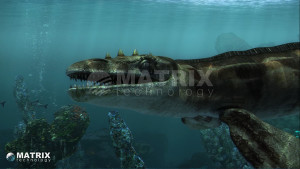 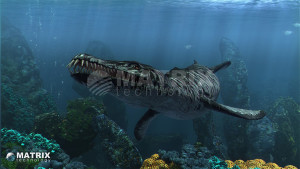 Size: 5-25 meters
Interesting fact:
Probably the biggest predator to ever live on earth! 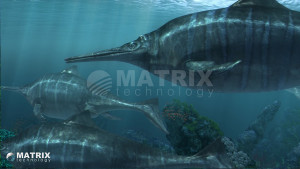 Size: up to 20 meters
Interesting fact:
Body similar to a whale’s! 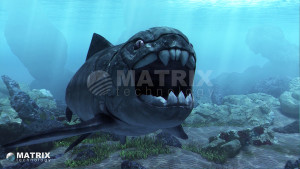 Size: up to 10 meters
Interesting fact:
Up to 5 tons of jaw pressure! 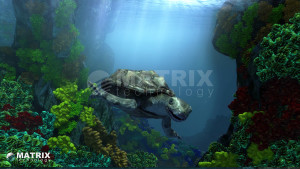 Size: 2.5 meters
Interesting fact:
Can swim for hundreds of miles! 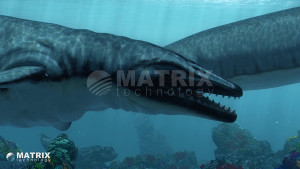 Size: about 18 meters
Interesting fact:
Moves like an eel but only vertically!

DANGEROUS PREHISTORIC SHARK ON THE ATTACK

The scene entitled “The Escape of Megalodon” is probably the most striking attraction. The whole floor moves around while the visitors watch an almost 20-meter-long prehistoric shark try to break through the aquarium glass. Additional effects like a siren signaling the warning, water splashing after the aquarium glass breaks, etc., boost the impression that you’re part of this frightening scene.

When I was looking at it, my jaw simply dropped – it was incredible! Amazing! The climax of of the trip brought me to my knees. You have to see it!

I was in the Prehistoric Oceanarium with students from my school. The children were screaming with fear but they were fascinated at the same time. Over the next few days I heard nothing but stories about the shark. 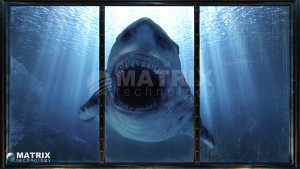 Size: up to 18 meters
Interesting fact:
Can be considered the ancestor of the shark!

PREHISTORIC OCEANARIUM IN YOUR PARK? – IT COULDN’T BE EASIER

The Prehistoric Oceanarium can be installed in already existing spaces like exposition halls, hallways or as a separate attraction in a building specifically constructed for this purpose. Each project is individually designed to meet our clients’ needs.

One of the biggest dinosaur parks in Europe. The Prehistoric Oceanarium featured there was rated the best attraction in its first season.

GlavElka, Russia – the biggest amusement park in Russia. The Prehistoric Oceanarium presented during the temporary exhibition was one of the most popular attractions.